Have you ever come across such a scenario where you have to make multiple requests and perform an action where all of these requests are fulfilled? Or perhaps, you want to check how many requests are resolved and how many of them are rejected?

In most of the cases, you are going to use Promise.all a powerful combinator which is helpful when handling multiple requests with promises. But there are also some drawbacks to using this combinator. To explain what this means, let’s take a look at Fig 1(a).

Assume you have some API endpoints in the URLs array, and have sent requests to all of them. If you are using  Promise.all, and even a single request is rejected then there will be a short circuit and the rest of the requests will be lost. You will also be unable to track the rest of the requests because the code block will fall into the catch case of the try catch statement.

Promise.allSettled is a new combinator that will be added to the Javascript in the future. Currently, it’s in its 4rth stage of the proposal.

Promise.allSettled() returns a promise that resolves after all of the given promises have either been resolved or rejected, with an array of objects that each describes the outcome of each promise.

Let’s modify the example given below:

We have passed the requests array to Promise.allSettled and called finally(). This implementation is completely free from short circuits. The flow will never stop due to rejection. Therefore, there will be no need to write try catch statements and extra checks. Looks cool right?  Why don’t we look at another use case then!

What if we have to track what requests are fulfilled and which ones have been rejected?  Traditionally, we would do it with the help of a helper function which takes a promise and returns its states to either fulfilled or rejected.

If you glance at the example given below, you will see that we have created a helper function named reflect.

Here, this function takes a promise as an argument and calls it in the return statement. If the promise is successfully resolved then it will fall into the first callback function of .then() block which is known as the onFulfilled.

Next up, we are going to pass reflect as the callback function to promises.map() which will then map over all the promises and return an array of all the results. For checking successful promises, we are filtering the results with the help of status. The successfulPromises array will contain all the fulfilled requests. And as you can see, this is a lot of work!

Let’s see how Promise.allSettled can simplify this process.

At first sight, you can feel the difference between the traditional approach vs using Promise.allSettled. There is no need to write your own implementation.

Promise.allSettled will map over the promises and will return an array that will contain all the results either fulfilled or rejected. We can filter the request just as we did in the traditional approach. All of this is clean, readable and much more maintainable.

You can feel the power of this amazing combinator with how it makes multiple request handling easy and safe. If you want to use it right now then here is a cool implementation of this combinator. Until then let’s just wait for this amazing feature to be added to the world of Javascript! 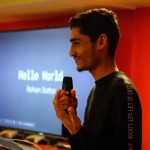 A Full Stack Software Developer who’s passionate about creating content that can be of value to others. Besides juggling university, work, and other commitments, he can be found solo traveling to contemplate the meaning of life under the stars.

Snapshots of real life at Mikaels Labs offices around the world.